Home Death and taxes: what to know about the financial impact

Death and taxes: what to know about the financial impact 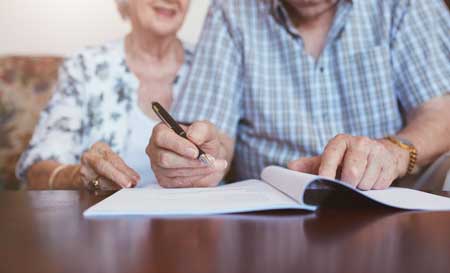 There are lots of circumstances to be aware of when it comes to the way your assets will (or won’t) be taxed after you pass away.

At some point, we will all have to deal with the death of a loved one, with all the emotional and psychological stress that entails. But, from a purely financial point of view, there are lots of questions to be answered.

Apart from legal costs, a deceased person’s assets may be subject to two main types of levies: income taxes and probate taxes or fees.

Probate refers to a legal process in which the will is certified by the court as the last will of the deceased, thereby providing protection to the executor and anyone acting under that document.

The amount of the probate tax varies widely from province to province. Clark Craig, a lawyer and certified financial planner, explains that Alberta charges only a small flat fee while in other provinces, the charges are quite high. For example, in Ontario, the probate tax is 1.5 per cent for assets over $50,000. In B.C, it’s 1.4 per cent, and in Nova Scotia it’s 1.7 per cent. Most other provinces are in the area of 0.7 per cent. And, in Quebec, there are no probate fees for a notarial will and only $65 for a non-notarial will.

In most cases, when it comes to joint ownership and direct beneficiaries, marital status is a key factor in determining whether your assets are automatically subject to probate and how they will be taxed when you die.

Most spouses hold assets jointly or name their spouse as beneficiaries for insurance and savings plans such as an RRSP, which means the assets may not be subject to probate. Another factor is whether you had a will.

Here are some scenarios to consider.

Scenario 1: You leave a will and a surviving spouse

If you have a spouse and you die with a will in place, settling the finances can be comparatively straightforward – especially if your main assets are jointly held, your spouse is the beneficiary of the estate, or your spouse is the named beneficiary of your insurance and plans (such as an RRSP), says Bob Gore, CPA, principal of Robert Gore & Associates Chartered Professional Accountants. In such cases, those assets – which may include bank accounts, investment portfolios, RRSPs, cottages and the family home – are all rolled over to your spouse for income tax purposes.

Scenario 2: You leave a will, but no surviving spouse

If you die without a spouse or common-law partner, things aren’t quite as simple, says Gore. That’s partly because you are deemed to have sold or cashed in everything you own – from your family home to your investment portfolio – at fair market value the day before you passed away; the spousal rollover is not available. Taxable gains on those items or the value of an RRSP / RRIF are all added to your taxable income on the terminal return, along with any income you earned until the day you died.

But listing your assets on the return does not mean they are all treated the same for tax purposes, says Gore.

“Your residence [designated as principal residence], insurance policies and TFSA are all tax-exempt,” he says. “But your stock portfolio, cottage [if not deemed as a principal residence], rental property or any business assets you might have are all taxable if they appreciated in value. That’s because you are deemed to have sold those assets for more than you paid for them. The gain is taxable as a capital gain.”

Gore adds that it also comes as a surprise to many people when they learn that their RRSPs will be deemed to be cashed in and fully taxed as income the day before they die – and depending on the value, the tax bill can be quite steep.

Timing can also become a problem. As Gore explains, “If you pass away on December 15, you have 11.5 months of income, plus RRSPs that are deemed to be cashed, a cottage (if you have one) that is deemed to be sold, plus any non-RRSP investments that are taxable. The tax bill can be large.”

To mitigate the effects of that bill, it’s definitely worth you doing some estate planning well in advance. “By the time you’re gone, in most cases, it’s too late for anyone else to do anything about your arrangements,” he says.

Scenario 3: You die without a will

If you die intestate, says Craig, the tax consequences are often much the same as if you had a will. However, you are in the hands of the courts and government legislation in terms of how your estate is going to be distributed. For these reasons and more, it’s extremely important that you have a will – and that you update it as your circumstances change – to ensure that your wishes are respected.

Have a big RRSP?

When you die, your RRSPs are treated the same as many other assets, says Bob Gore, principal of Robert Gore & Associates Chartered Professional Accountants. In other words, their total value is deemed to be cashed the day before you die (unless you have a surviving spouse or, if certain conditions are met, a dependent child or grandchild; in those cases, it can be rolled over to them tax-free).

If you have named beneficiaries in the RRSP, it’s important to keep in mind that it’s the estate that pays the tax on the deemed income. To illustrate, let’s assume that the deceased owned a house as a principal residence and an RRSP at death and each is worth $1 million. “That means, if you die with a million-dollar RRSP and you live in Ontario, the tax bill could easily be $500,000,” says Gore. However, no tax will be paid on the house due to the principal residence rules.

Gore points out that many people – even sophisticated investors – forget about the taxes when they are doing their planning. “They just think about the deductions they are getting over the years. Then, in their general planning, they just say, ‘I’m going to give the RRSP to my son and the house to my daughter.’”

“But it’s not that simple. The house isn’t taxable, but the RRSP is,” he says. “Who’s going to pay the tax on the RRSP? You need to consider the after-tax value of all your assets before you decide how they are going to be divided.” In the case mentioned above, the total value of property is $1.5 million after tax but the son will get $1 million as RRSP beneficiary while the daughter will only receive $500,000 as the estate has to pay the tax on the RRSP before it can pay the proceeds from the house to her. In this case, the will needed to take into account how the final taxes will be paid along with estate planning goals more generally.