The new Liberal government has proposed a few
minor changes to personal income taxes for 2016
and beyond.

The election of a new government in Ottawa is often
accompanied by changes to the way income is taxed.
The last federal election was no exception. The
changes announced in the March 2016 budget that
will impact many taxpayers are as follows:

Spousal income splitting was eliminated. In the past,
one spouse or common-law partner could transfer
as much as $50,000 of taxable income to the other
to save up to $2,000 in income taxes. This option
will no longer be available.

Taxpayers with children are familiar with the
Canada Child Benefit (CCB) tax-free monthly payment
and the taxable Universal Child Care Benefit
(UCCB) that were designed to assist parents with the
cost of raising children under the age of 18.
The new budget proposes that the CCB will provide
as much as $6,400 per child under the age of six and
$5,400 for children from six to 17. As can be expected,
the benefits will not apply equally to all income categories.
Levels of payout will be adjusted for those whose
family income is between $30,000 and $65,000 and
those who earn in excess of $65,000. If family income
exceeds $200,000, there will be no benefits.
Indications are that the CCB will not be taxable and
will not be included in certain federal income-test
programs such as the Registered Disability Savings
Program (RDSP). The new structure will be based
upon the adjusted net family income for the 2015 tax
year. Because the amount of the benefit will be tied to
family income, benefits will be reduced as income rises.

Individuals attending post-secondary educational
institutions could previously claim tuition fees plus an
education and textbook amount based upon the number
of part-time or full-time months of attendance at
a qualified institution. For 2016, the federal education
and textbook amounts will be eliminated. The tuition
fee amount will remain intact.

There are teachers and early childhood educators who
may spend their own money on classroom supplies. To
offset these out-of-pocket expenses, a new Teacher and
Early Childhood Educator School Supply Tax Benefit
will be introduced. A licensed and certified teacher can
now purchase up to $1,000 worth of school supplies
each year and receive a tax credit of 15% that should
provide a tax savings of up to $150 each year.

The Home Buyers’ Plan (HBP) allows first-time home
buyers to withdraw up to $25,000 from their RRSP to
purchase or build a home without having to pay tax on
the withdrawal. The current plan required the amount
to be repaid over a 15 year period. The government will
now allow taxpayers faced with significant life changes
(e.g., job relocation, death of a spouse, marital breakup
or the requirement to house an elderly family member)
to borrow from the RRSP without tax penalty.

The budget proposes to waive the Employment Insurance
(EI) premium for 12 months for companies that
hire individuals between the ages of 18 to 24 if they are
hired into a permanent position in the years 2015 to
2018 inclusive. A minor reduction of the EI rate after
the first year of hiring is contemplated as well.

The former Conservative government raised the age
of eligibility to collect Old Age Security (OAS) from
65 to 67 starting in 2023. The new rules of the Liberal
government will return the age of eligibility to 65. This
age drop applies equally to the Guaranteed Income
Supplement. Both programs will be adjusted to a new
Seniors Price Index to reflect the actual rising cost of
goods and services.

Tax cuts are always welcome. If all goes as planned,
middle income individuals (i.e., those earning between
$45,283 and $90,563 per annum) will have their tax
bracket lowered. This table provides the tax bracket
as well as a comparison of 2015 and anticipated 2016
federal tax rates. 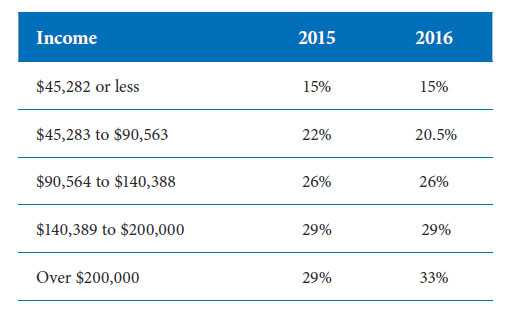 Changes to the tax system for individuals will not
have a significant impact on the take-home pay for
the average taxpayer and will not, for most, change
the information required for preparation of the 2016
personal income tax returns.